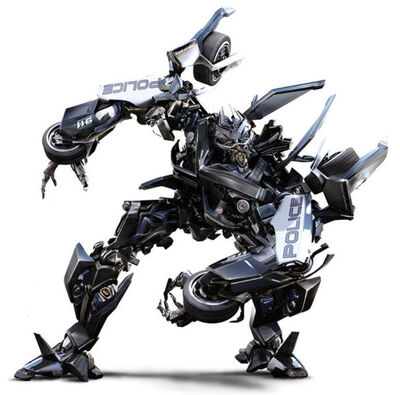 Barricade is one of the main Decepticons in the film, and the very first Transformer to speak English. He first appears hunting down Sam Witwicky to interrogate him about his great-great-grandfather's glasses (that have the location to the Allspark). Sam escapes with his crush, Mikaela Banes in Bumblebee's Camaro vehicle-mode, and Barricade chases them. After the chase, Bumblebee transforms into his robot mode, and on arriving, Barricade attacks the Autobot. He releases his partner, Frenzy, to go after Sam and Mikaela, while he battles Bumblebee. Barricade isn't able to kill Bumblebee. However, he survives (as shown by the brief scene showing him as the first Decepticon responding to Starscream's call), and appears later on during the highway chase scene, where Sam recognizes him (as "the same cop"). Barricade disappears after the highway chase scene. He did die in the leaked early film script. Much like the comic book and novelization, he is killed shortly after Optimus Prime's motorway battle with Bonecrusher whilst attacking Prime from behind.