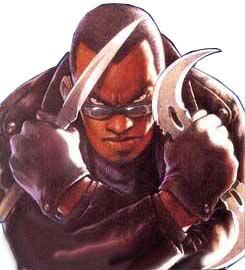 The man known only as Blade came into the world an orphan. Bitten while in labor by the vampire Deacon Frost, his mother died during childbirth. Blade was taken in and raised by his mother's friends. Determined to avenge her death, he fashioned himself into a vampire hunter even before he reached adulthood. After stalking the night on his own for a number of years, Blade became leader of a small band of like-minded individuals hunting Dracula.

Blade currently has appeared in the Superhero Squad line one time:

Retrieved from "https://hasbroheroes.fandom.com/wiki/Blade?oldid=14594"
Community content is available under CC-BY-SA unless otherwise noted.