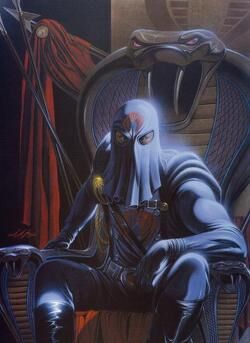 Not much is known of the background of the man many call the Cobra Commander. What we can only tell is how he works and how he thinks. We know that he has deliberately started political and social conflict in a number of areas. He has amassed an army by recruiting displaced people, promising them money, power and a chance to get back at the world that hurt them. In return, he demands that they swear absolute loyalty to his cause. What is his cause? World domination.

Cobra Commander does not delude himself by justifying his actions as matters of principles or glory. He knows he does it for control and power. He is ruthless, hatred-personified and totally obsessed. A meticulous person, he likes to personally oversee vital projects himself, even engaging in military combat himself on occasion.

For most of the movie, he is referred to as "the Doctor", a scientist working with James McCullen concerning his research on nanomites. It is revealed that he was Rex Lewis, the younger brother of Ana Lewis and once a soldier alongside Duke. Rex was presumed dead after a building Duke sent him into was hit with a premature air strike called in by Duke and was left for dead. But in reality, prior to the explosion, Rex saw McCullen's early experimental research on nanomites conducted by the real Doctor Mindbender and was in awe of the sight. Surviving the incident, yet severely scarred, both physically and mentally, Rex learns from Mindbender and perfects the nanomites, using his own sister as a test subject in creating the Neo-Vipers as well as having a vendetta against Duke for leaving him to die. When Duke is captured, Rex reveals himself as he attempts to subject him to the nanomites and making him a slave like the Neo-Vipers. By then, Baroness overcomes her programing and saves Duke. Escaping with a badly burned McCullen, Rex uses specially made nanomites to heal the man's face but also encases it in silver. Dubbing him Destro, Rex puts on a mask and tells McCullen to call him Commander. Though under arrest and placed in a high security prison aboard the USS Flagg, Cobra Commander's master plan had only begun with Zartan disguised as the President of the United States.

The Cobra Commander has currently appeared in the Combat Heroes line two times, was rumored to appear another time, and was expected to appear two more times:

Retrieved from "https://hasbroheroes.fandom.com/wiki/Cobra_Commander?oldid=14744"
Community content is available under CC-BY-SA unless otherwise noted.