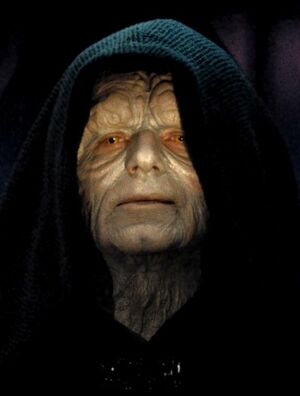 Appearances: The Phantom Menace, Attack of the Clones, Revenge of the Sith, The Empire Strikes Back, Return of the Jedi

Darth Sidious, born as Sheev Palpatine, was a Force-sensitive Human male who served as the last Chancellor of the Galactic Republic and the first Emperor of the Galactic Empire. He was a Dark Lord of the Sith who followed the Rule of Two, an ancient tenet of the Order of the Sith Lords, and was the most powerful Sith Lord in galactic history. His entire life as a Sith was the culmination of a thousand year plan to overthrow the Republic and the Jedi Order from within. As Palpatine and Sidious, he was responsible for escalating the Separatist crisis until a galactic-wide conflict, known as the Clone Wars, began when the rebellious Confederacy of Independent Systems challenged the Republic for primacy over the galaxy. In 19 BBY, he revealed his identity as Darth Sidious to the Jedi Knight Anakin Skywalker. All proceeded according to plan when Skywalker informed Jedi Master Mace Windu of the Chancellor's duplicity. Windu's failed attempt to arrest him, combined with Skywalker's conversion to the dark side of the Force, contributed to the rise of his New Order. All members of the Jedi Order were accused of treason and, as a consequence of Order 66, betrayed by their Clone Troopers. Without the Jedi to oppose him, Sidious declared himself emperor of the first Galactic Empire, thus bringing an end to the Republic that had stood for over 25,000 years. Among his first acts under the new regime, the Emperor enacted the state-sponsored systematic extermination of the surviving Jedi, ironically carried out by his new apprentice, Darth Vader, formerly Anakin Skywalker of the Jedi Order. Throughout most of his reign, Sidious all but disappeared from public life, opting to live in the opulence and grandeur of the Imperial Palace on Coruscant while Vader acted as his military executor and chief enforcer. Unfortunately for his Empire, Sidious was far too distracted by his own anger and frustrations to realize that Darth Vader had reverted back to the persona of Anakin Skywalker. Unwilling to stand by and watch his son Luke Skywalker die in under the agonizing effects of Force lightning, Anakin lifted Sidious over his head with one arm and threw the Emperor down the Death Star’s shaft. Although Anakin was mortally wounded for his efforts, his single act of redemption fulfilled the prophecy of the Chosen One and brought about the end of the Order of the Sith Lords. The death of Darth Sidious and the destruction of the second Death Star marked the Battle of Endor as a crushing defeat for the Galactic Empire. Throughout the rest of the Galactic Civil War, the remnants of the Empire experienced a sharp decline while the Alliance reformed itself into the New Republic.

Darth Sidious has appeared in the Galactic Heroes line [?] times

Retrieved from "https://hasbroheroes.fandom.com/wiki/Darth_Sidious?oldid=15211"
Community content is available under CC-BY-SA unless otherwise noted.