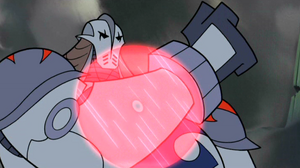 Durge was a Gen'Dai bounty hunter active in the galaxy for almost two thousand years. Able to survive several near-death situations due to his Gen'Dai heritage and enhanced battle armor, he fought in several wars and collected a multitude of bounties. Over the centuries, Durge acquired a deep distaste for Mandalorians, and even killed their leader at one point. As a result of both personal tragedy and torture, he became increasingly mentally unstable. Tempted by the idea of killing Republic Clone Troopers, clones of the Mandalorian Jango Fett, Durge was recruited into the Confederacy of Independent Systems during the Clone Wars. Given the rank of commander, he performed several key missions for Count Dooku himself, and led droid forces in combat on more than one occasion. Near the end of the war, he was launched, and Force-pushed into a star near Maramere by Anakin Skywalker where he was truly killed.

Durge has appeared in the Galactic Heroes line 1 time