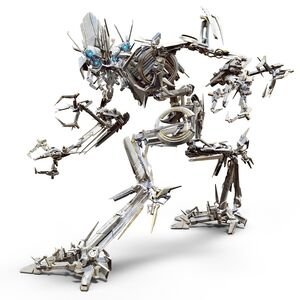 Frenzy first appears when he infiltrates Air Force One to hack into the U.S. military's mainframe to find out Megatron's location. The military officials disrupt the downloads and send three secret service agents after the infiltrator, but Frenzy manages to kill them and escape. He then aids Barricade in locating Sam Witwicky. When let loose on Sam and Mikaela Banes, Frenzy attacks Sam but is decapitated by Mikaela using a reciprocating saw. He survives the injury and leaving his inert body behind, his head sprouts spider-like legs for movement, reformats into Mikaela's mobile phone and hides in her bag. Later, he infiltrates the Hoover Dam and uses the power of the All Spark to regenerate his lost body. He then proceeds to shut down the cooling systems, resulting in Megatron's reawakening, and alerts the Decepticons to the All Spark's presence. While attacking a group of humans in the control rooms, Frenzy accidentally kills himself when one of his own shurikens goes full circle and slices his head in two. He speaks mostly in Cybertronian, with occasional english words thrown in between. In Transformers: Revenge of the Fallen, Frenzy's reconstructed head is seen in the basement of Seymour Simmons' mother's deli. When Leo approaches the head in a jar, Simmons warns him, "Don't touch that; it's still radioactive."

Frenzy has currently appeared in the Robot Heroes line one time: