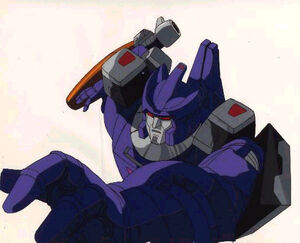 On the Decepticons' return journey to Cybertron following their attack on Autobot City in the Earth year 2005, a mortally wounded, but still functional Megatron was jettisoned into space along with several other fallen Decepticons in order to reduce Astrotrain's mass to reach Cybertron. The end seemed to be near for Megatron -- but it was not to be, as he was summoned by Unicron, who made him an offer - in return for Megatron's service, he would give him a new body and new troops to command. Megatron initially refused, enraged at the thought of being Unicron's servant. However, faced with obliteration as his only alternative, Megatron reluctantly accepted Unicron's offer, and was reformatted as Galvatron. Commanded by Unicron to destroy the Matrix of Leadership, Galvatron first returned to Cybertron to settle an old score with Starscream, who had set him adrift in space and was now being crowned as the new Decepticon leader in a pompous ceremony. Demonstrating his new power, Galvatron obliterated Starscream with a single blast from his new cannon mode. The other Decepticons quickly accepted Galvatron as their leader. Unicron's subsequent consumption of Cybertron's moons enraged Galvatron, but when Unicron mentally tortured him to put him in his place, Galvatron submitted. Leading another attack on Autobot City, he pursued Ultra Magnus and the Autobots to the Planet of Junk, where he seized the Matrix from Ultra Magnus, and attempted to use its power against Unicron. Unable to open the Matrix, Galvatron was powerless as Unicron transformed and attacked Cybertron with his bare hands. Unicron swallowed Galvatron in contempt, while swatting away Cybertron's Decepticon defenders like flies. Shortly thereafter, a group of Autobots entered Unicron's body, where the youthful Hot Rod encountered the humiliated Decepticon leader. Although Galvatron initially proposed an alliance with the Autobot against Unicron, he was once again tortured mentally by Unicron, who tells him to destroy Hot Rod otherwise Galvatron himself will be obliterated. Galvatron weakly agrees, still accepting Unicron as his master, and then engaged Hot Rod in battle. Galvatron quickly attained the upper hand over the smaller Autobot. However, when Hot Rod seized the Matrix from Galvatron, he was reformatted into the much larger and more powerful Rodimus Prime. Rodimus easily defeated Galvatron and hurled him through Unicron's armor and into the void of space, before unleashing the power of the Matrix and destroying Unicron.

Galvatron has currently appeared in the Robot Heroes line one time: