Hasbro Heroes Wiki is an information source for Marvel Superhero Squad, Star Wars Galactic Heroes, G.I.Joe Combat Heroes, Indiana Jones Adventure Heroes, Transformers Robot Heroes, and Toy Story Toy Box Heroes, as well as other mini figure lines. You may know us from the Hasbro Heroes Forum. Right now the Wiki is under heavy construction. But hopefully we'll have it complete soon. In the meantime, feel free to join us back at the forum! 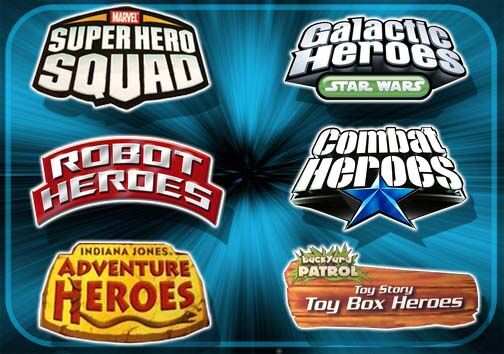 Click on the logos to navigate through the site

And tons of other random repaints including Red She Hulk, Doombots and more! Get the updates HERE!

Check out all the updates HERE! So far for we've got...

A new SHS Vehicle and a new SHS Playset!

And a new poster for Action League that shows:

Keep checking for updates! And of course discuss back at the forum.

So apparently the back of the Batman vs. Chemo Set shows the upcoming Wave 5! It pairs up alot of the leaked figs we've already seen via eBay Hong Kong. Here's how they lined up:

After a few months of not hearing anything, finally we get info on a new possible SHS wave; Wave 20! Check it out:

So new characters: Taskmaster & Ronan...what do you guys think? Excited? Disappointed? Tell us back at the forum.

Yes, it's about that time! Toy Fair is just around the corner so start checking HERE for any up to date news. We will try and update the page as soon as we get any info. And don't forget to join the conversation back at the  forum.

Looks like Wave 4 has been spotted in stores. So far we know the Wave consists of Batman (w/batarang) & Scarecrow, Green Lantern (Guy Gardner) & Dr Polaris and Black Lightning & Wildcat, but there could be more. Be on the lookout!

Check out the three NEW Iron Man 2 Super Hero Squad 3-Packs OUT NOW: Armor Evolutions, Armor Wars Part 1 and Part 2. Thanks to Floridaboy back at the  forum for the scoop and pics!

Woooooot! A big thanks to everyone that helped - floridaboy, Imaginexus, Stewbacca, Jestergoblin, Neozero, Hnamelissa, Vegeta and ESPECIALLY X-Fan. He really worked hard on what you see so far. And as he said, still lots to do, but the framework is there. So please free to give us any ideas and/or let us know of any corrections we need to make OR make them yourself if you feel comfortable enuff to.

Bios - We have a neat bio section that gives u a lil bit of info on the character, but will also show u images of all the versions of that character that has been released - so in essence, side by side comparisons.

Other lines - we plan on keeping the lines we cover to a minimum so we can be thorough. Mostly Hasbro heroes, but some other mini figs as well. If u think another line applies, please let us know.

its only the blueprint, but you should get the idea. We hope to get the OK from all of our great customizers on here to participate and have an awesome - and definitely largest - database of Hasbro Heroes customs on the net. Plus itll be a small space where the customizers can show their stuff, and even advertise.

So, what do u guys think so far? Let us know back at the  forum!

Oh and remember to check out the new pics of Wave 18!