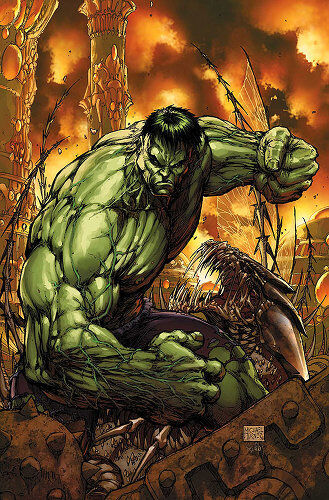 Powers: As Bruce Banner, has expertise in the fields of biology, chemistry, engineering, and physiology, and holds a Ph.D. in nuclear physics. “One of the greatest minds on earth.” As the Hulk, he has near-limitless physical strength, in direct correlation to his mental state, resistant to most forms of injury or damage and has a regenerative healing factor.

Team: The Avengers , The Defenders

Bruce Banner developed the first Gamma Bomb and during an experimental detonation, teenager Rick Jones mistakenly entered the detonation zone. Bruce pushes Rick into a trench saving his life but in doing so, absorbed the brunt of the radiation. Although his changes from Banner to the Hulk have been triggered by the sunset, additional doses of gamma radiation, it is his state of mind that actually triggers the change. The madder he gets, the stronger he gets. Usually the Hulk possessed little of Banner's memory and intelligence and was easily enraged. Hence, the Hulk was a menace, continually hunted by military forces commanded by the implacable General Ross. Hulk has been a member of both the original Avengers and Defenders, although his anger has severely prevented him from becoming a real team player.

Powers: Same as above but slightly less strong and intelligent but has control over transformations

The Gray Hulk (though possibly not the original) worked for a time as a Las Vegas enforcer called "Joe Fixit". The Gray Hulk has average intelligence, although he occasionally displays knowledge and intellectual ability normally associated with Banner. He is cunning, crafty, hedonistic, arrogant, and distant, with a hidden conscience. In most of his Las Vegas appearances, he appears only at night. According to the Leader, the Gray Hulk persona is strongest during the night of the new moon and weakest during the full moon. This aversion to sun/moon light vanished when the Gray Hulk's night-induced transformation trigger was later removed. Although he is the smallest of the Hulks, the Gray Hulk towers over the average human. He prefers to dress in tailored suits. Joe Fixit's base strength level is also the lowest of the three primary Hulk incarnations. While in a functionally calm emotional state, Joe Fixit is able to lift about 70 tons.

Powers: Same as above but highly enraged giving him massive amounts of strength which has has control over. He's also now trained in combat arms.

Banner sought refugee and peace in Alaska, where he lived as a hermit loosely connected to the town community. He was eventually tracked down by Nick Fury of S.H.I.E.L.D., who required his help in defeating the Hydra space weapon called the Godseye which could detonate all the nuclear bombs in the world. Sent up as the Hulk, he discovered that the Godseye was actually a rogue S.H.I.E.L.D. weapon that could match the strength of any enemy. In the ensuing battle, the Godseye found that though it could try, it could not match the increasing power of the Hulk, and it exploded. A S.H.I.E.L.D. commissioned space shuttle was sent to retrieve the Hulk, or so he believed. Seizing the opportunity to be rid of the Hulk, a group of superheroes known as the Illuminati decided to jettison the shuttle into space, to a planet with no intelligent lifeforms. Unfortunately, there was a navigation error, and the Hulk landed on the planet Sakaar, a world filled with barbarian tribes, gladiator battles and ruled by a corrupt empire. The Hulk was captured to become a gladiator, but he ushered an uprising, overthrowing the current regime. Installing himself as king, the Hulk met and fell in love with a queen named Caiera Oldstrong. Together, they ushered in a new age of peace and prosperity for Sakaar. Caiera became pregnant with the Hulk's child, but died when the shuttle that brought the Hulk to Sakaar suddenly exploded, killing millions of people. Driven to new heights of rage and fury, the Hulk swore revenge against the Illuminati, whom he held responsible for the death of Caiera Oldstrong. He even lashed out against his allies the Warbound, but they managed to calm him down and swore to aid him in his quest for vengeance. The Hulk rode atop the prow of an alien warship as it set course for Earth.

Powers: Same as Planet Hulk but at points has reached even higher levels of rage

Reaching the moon, the Hulk defeated the Illuminati member Black Bolt. The Hulk then proceeded to New York City, where he demanded the presence of the Illuminati and that the city be evacuated. As the time limit for the evacuation of New York had passed, Hulk defeated Iron Man and Stark Tower was destroyed in the process. The heroes engaged the Hulk and his Warbound but were defeated. General Thunderbolt Ross called in the U.S. Army to dispatch the Green Goliath but despite the army's best efforts, including the use of adamantium bullets, Hulk defeated them. Alongside his Warbound, he transformed an area near Madison Square Garden into a gladiatorial arena. After a battle with a demon controlled Dr. Strange, Hulk sent the four captured Illuminati members (Black Bolt, Iron Man, Dr. Strange, and Mr. Fantastic) into the arena and forced them to fight. He allowed them to live but soon, a nearly insane Sentry arrived on the scene and a cataclysmic battle ensued between him and Hulk. Sentry unleashed forces that nearly destroyed what was left of New York, but ultimately, it was a stalemate between the two. The Hulk then reverted back to Bruce Banner and the Sentry reverted back to Bob Reynolds, and in their human forms Bruce Banner was able to knock out Bob Reynolds. It was later revealed that the Warbound member Miek was actually the one who allowed the mass deaths on Sakaar to which Hulk responds by unleashing a massive rage that threatened the entire eastern seaboard. Following, Hulk reverted back to Bruce Banner and Iron Man was able to take him into S.H.I.E.L.D. custody.

In the Ultimates series, Banner works for S.H.I.E.L.D., attempting to re-create the super-soldier formula that created Captain America. He injects himself with an experimental version of the formula, turning into the green-skinned Hulk, and rampaging through New York, and is only stopped through the combined efforts of Spider-Man and a S.H.I.E.L.D. battalion led by General Ross. He later combines Captain America's blood with his previous Hulk formula, and injects it into himself, thereby transforming him into the more powerful gray-skinned Hulk. After escaping an execution attempt, Banner travels through France, Ireland and India, seeking a means to control the Hulk within. With seeming control over the beast, Banner joins the Ultimates and aids them in fighting villains.

Powers: Same as the original Hulk

Appearances: The Incredible Hulk and The Avengers

A gamma radiation accident transformed mild-mannered scientist and radiation expert Bruce Banner into the Hulk, and hospitalized his former Harvard co-ed/girlfriend, Betty Ross. Now a fugitive from the United States Army, and Ross' father, General "Thunderbolt" Ross, Banner works in a soft drink bottling factory in Brazil while attempting to find a cure for his condition with the help of an Internet friend. He also studies martial arts and meditative breathing techniques with a judo expert to help control his emotions, and has not suffered a transformation for five months since the accident and his injuring of Betty. After Banner suffers a cut, his blood finds its way into a soda bottle that is eventually drank by an ill-fated consumer. Following a ferocious battle in the soft drink bottling plant where he transforms into the Hulk, Banner escapes Blonsky, and ends up in Guatemala and then Mexico, from which he travels to the United States. He soon visits his friend Dr. Samuel Sterns who attempts to cure the Hulk. He appears to succeed but is later visited by Blonsky who uses the serum to transform himself into the Abomination. Abomination goes on a rampage in the city, hoping to draw out Banner who realizes that he is the only one who can stop the Abomination. He jumps out of Ross' helicopter as it hovers over the city, hoping the fall will stimulate his adrenal glands into triggering a transformation. Banner's plans succeed and after a violent, pitched battle, the Abomination is defeated when the Hulk brutally strangles him with a huge chain but is stopped from killing him by Betty. After winning the battle, the Hulk flees the scene with the army in hot pursuit. In The Avengers film he was played by Mark Ruffalo and helped the Avengers fight and defeat Loki

Hulk currently has appeared in the Superhero Squad line twenty-seven times, and was expected to appear another time: