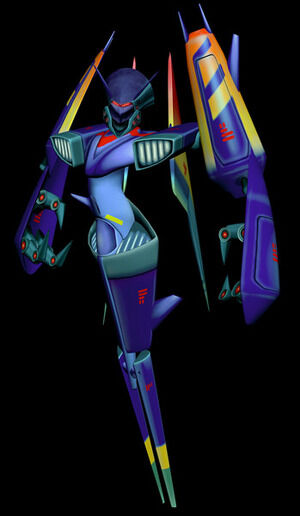 Jetstorm came online alongside fellow generals Tankor and Thrust fairly early on in the Beast Machines conflict, when Megatron realized that controlling his vast armies of Vehicon drones directly was beyond even his mental capacities. In order to more efficiently control his forces, he created the Vehicon generals to serve as field commanders answering directly to him. In order to give these generals life, he used the sparks of two captured Maximals and one Predacon, hoping that Optimus Primal and his crew would be reluctant to fight their former comrades-in-arms. For Jetstorm, he used the spark of the Fuzor Silverbolt. Although Silverbolt's former lover, Black Arachnia, initially believed that it was Thrust who possessed the spark of her beloved, she soon discovered the truth, and went to great lengths to reawaken the Maximal spark Jetstorm held within.

Jetstorm has not currently appeared in the Robot Heroes line, but he was supposed to:

Retrieved from "https://hasbroheroes.fandom.com/wiki/Jetstorm?oldid=14717"
Community content is available under CC-BY-SA unless otherwise noted.