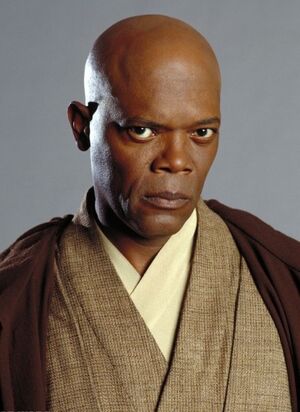 Appearances: The Phantom Menace, Attack of the Clones, Revenge of the Sith

Mace Windu was a male Jedi Master of legendary status who was the Master of the Order in the days leading up to the Battle of Geonosis, after which he gave the title to Grand Master Yoda. Mace Windu served as one of the last members of the Jedi High Council before the Great Jedi Purge. Serving on the Council, Windu was often regarded as second only to the Grand Master Yoda, though Windu was eight centuries Yoda's junior. Windu's wisdom and power were considered legendary by many, as were the weight of his words. Widely considered one of the best swordsmen in the Jedi Order, Windu created Vaapad, the modern seventh form of lightsaber combat which he mastered. Windu served the Jedi Order his entire life, training several Jedi. It was Master Windu who led two hundred and twelve Jedi into combat at the Battle of Geonosis and slew the infamous bounty hunter Jango Fett. He continued to serve the Republic throughout the Clone Wars, often on the frontlines of fierce fighting, where he led Republic forces as a High Jedi General. In the final days of the war, Windu confronted and defeated Darth Sidious in a difficult duel. He was ultimately betrayed by Anakin Skywalker and subsequently killed by Sidious, falling to his death from the window of Sidious's office.

Mace Windu has appeared in the Galactic Heroes line [?] times

Retrieved from "https://hasbroheroes.fandom.com/wiki/Mace_Windu?oldid=15246"
Community content is available under CC-BY-SA unless otherwise noted.