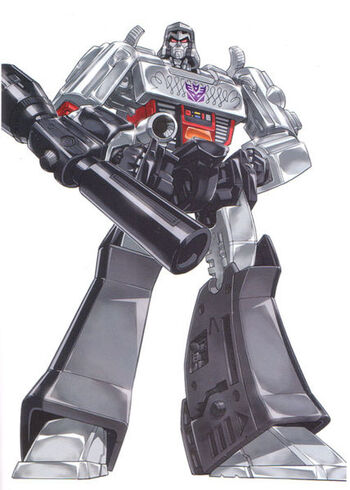 Megatron is a Decepticon, one of the lineal descendants of the military hardware robots created by the Quintessons on their factory world of Cybertron. Following a war between the Decepticons and the other robot race, the Autobots, the Decepticons were defeated by the Autobots' invention of transformation. The Autobot victory began the Golden Age of Cybertron, but the Decepticons too eventually developed transformation, leading to the creation of Megatron. Gathering a small number of troops together, Megatron killed the Autobot leader. However, the ancient Autobot, Alpha Trion reconstructed young robot Orion Pax into Optimus Prime, leader of the Autobots as the war erupted again. The war drained Cybertron of most of its energy, necessitating that both factions seek out new worlds and new sources of power. Megatron and his forces attacked and boarded the Autobots' craft, causing it to crash on prehistoric Earth, entombing all on the ship in emergency stasis as it crashed into a dormant volcano. Upon awakening, Megatron and his Decepticons discovered that Earth was a world teeming with organic life and vast energy resources, more than enough to re-power Cybertron and allow the Decepticons to conquer it and other worlds. Over the following years, Megatron's schemes to obtain Earth's energies continued. Megatron even made a number of temporary alliances with the Autobots, although most of these alliances ended in double crosses.

After being discovered by Archibald Witwicky, Megatron's frozen body was transported to the Hoover Dam to be guarded by Sector Seven, a secret government organization that studies extraterrestrial activities. Agent Seymour Simmons explains that Megatron's technology was reverse-engineered, producing the world's modern technology. Megatron's location, as well as the Allspark's, is located by a group of Decepticons led by Starscream. Frenzy thaws out Megatron, who escapes outside and learns from Starscream that the humans have the Allspark. Megatron pursues the Autobots and their allies to Mission City where he quickly disposes of Jazz and then battled Optimus Prime. He defeats Optimus and then pursues Sam Witwicky up a condemned building, attempting to taunt and threaten the human into giving him the Allspark. Sam declines, prompting Megatron to knock the boy off the roof of the building with his flail. Optimus saves Sam and battles Megatron again. During the battle, Megatron attempts to seize the Allspark once again, only to have it shoved into his exposed spark chamber by Sam, killing him. Megatron's body is then dumped in the Laurentian Abyss with the other deceased Decepticons. Megatron returns for the sequel film, Transformers: Revenge of the Fallen, where he is depicted more as The Fallen's enforcer rather than commander of the Decepticon armies, as the Fallen is the true commander of the Decepticons. Megatron is revived by Scalpel and the Constructicons with an Allspark shard and now takes on the form of a Cybertronian winged tank. He then flies to the Nemesis and talks to his master, the Fallen, of the Allspark's demise before discovering that its knowledge (which has been passed on to Sam) is the key for providing energon, which is needed by the Decepticons in order to awaken their protoform armies. Sam, Mikaela Banes and Leo Spitz then get dropped by Grindor into an abandoned factory where Megatron meets them. Pinning down Sam, threatening to torture him after acquiring what he needed, Megatron orders Scalpel to remove energon information from Sam's brain, but Scalpel is quickly stopped by Optimus Prime. Megatron and Prime fight outside and Starscream and Grindor join in. The fight ends with Megatron killing Prime, but then being forced to escape due to Autobot reinforcements. Megatron then declares to Starscream that the Decepticons must reveal themselves to the humans in order to flush out Sam, and assists the Fallen in ordering the world's humans into finding Sam and bringing him to the Decepticons. Megatron then fights in the final battle in Egypt, where Optimus shoots him in the face with his own cannon, destroying half of it, and then tears off his right arm. After seeing the Fallen defeated, he and Starscream retreat, vowing that it wouldn't be over.

A Predacon warlord before coming to Earth, he is believed to have decimated numerous planets in his quest for energy. Optimus stated that Megatron left entire planets as "lifeless barren rocks". Needing ever more energy, Megatron targeted Earth's energy; to that end, he kidnapped the human energy-research expert, Doctor Kenneth Onishi, using his psycho-probe to drain information on Earth's energy sources from his mind. But even his subordinates were unaware that Megatron had a greater scheme in motion. His attempts to amass energy thwarted by the Autobots and the incompetence of his own troops, Megatron sought to bolster his forces, locating six Autobot protoforms in a crashed Cybertronian spaceship, bestowing them with military vehicle modes and corrupting them with his own Spark energy, creating the Decepticons. However, their leader, Scourge, happened to scan Optimus Prime along with the tanker that would form his alternate mode, and as a result became something of an "evil clone" of Prime, whose cruelty and cunning eventually extended to plotting against Megatron. In the pursuit of his greater agenda, Megatron began seeking the mysterious O-Parts, which led to the Orb of Sigma, in a subterranean pyramid. The orb would lead to Cerebros, the power key to the huge Autobot battle station, Fortress Maximus, who, it was revealed, he had actually come to Earth to obtain. When Megatron was buried in the ruins of the pyramid following a failed attempt to steal the orb from the Autobots, he underwent his most startling transformation of all, as the energies of the pyramid resurrected him as the vampiric Galvatron, able to enhance his own strength by draining the life energy from others. As Galvatron, he possessed four additional transformations - a hydrofoil, a gryphon, a pterodactyl and an elephant, used to terrifying effect when he drained the energy of Fortress Maximus and engaged Omega Prime in a final battle at the Earth's core. Thankfully, Prime was able to defeat him with the gathered energy of Earth's children, courtesy of Fortress Maximus, and he was sent back to Cybertron for imprisonment.

Megatron has currently appeared in the Robot Heroes line nine times and was expected to appear another time: