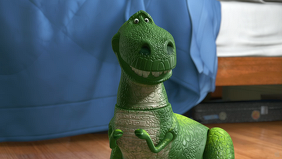 Rex is a large, green, plastic Tyrannosaurus rex with a lot of anxiety from an inferiority complex and he is afraid he is not scary enough. Rex's worst fear (after Sid) is that Andy will gain another, scarier dinosaur, but feels better after Buzz gives him a few pointers on how to roar better. Rex is based on the Tyrannosaurus toy from the Dinoriders toyline and states that he was made by a subsidiary of Mattel.

Rex currently has appeared in the Toy Box Heroes line one time:

Retrieved from "https://hasbroheroes.fandom.com/wiki/Rex?oldid=15226"
Community content is available under CC-BY-SA unless otherwise noted.