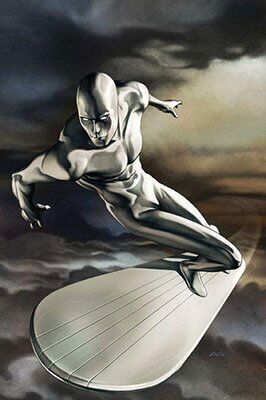 Powers: Cosmic which include flight(capable of greater than the speed of light), indestructibility, cosmic energy projection and matter manipulation

One of the noblest and most tormented cosmic entities in the universe, the Silver Surfer treasures freedom above all else, but has often sacrificed his liberty for the greater good. He was born Norrin Radd on the planet Zenn-La, part of an extremely long-lived and technologically advanced humanoid race which had created a worldwide utopia devoid of crime, disease, hunger, poverty, and want of any kind. Norrin's mother Elmar, ill-suited to this stifling environment, eventually killed herself. Urged on by his atypically ambitious father Jartran, Norrin was raised as a grimly intellectual youth, encouraged to seek knowledge, advancement and achievement rather than the aimless hedonism which had come to dominate Zenn-Lavian society; however, a disgraced Jartran would later commit suicide himself after he was accused of idea theft (though not before he had taken a new lover and fathered another son, Fennan, unknown to Norrin). Despite his lifelong lover Shalla-Bal, Norrin grew into a restless soul who longed for challenge and struggle, immersing himself in histories of Zenn-La's adventurous ancient past. When Galactus appears to devour Norrin’s home world Zenn-La, Norrin makes a bargain with Galactus, vowing to serve as his herald in exchange for sparing his planet. Galactus imbues Norrin with a small portion of his cosmic powers. Scouring the stars for planets to consume, Norrin leads Galactus to Earth where the Fantastic Four help Norrin rediscover his noble spirit and together they stop Galactus who exiles the Surfer for his betrayal. He then wanders the stars just trying to fit in somewhere. He finds this place among the Defenders who he helps to fight evil on his new home of Earth.

Alias: Same as above

Powers: Is a somewhat depowered version of how he used to be. In the gladiatorial ring, he wields a mace.

During his travels, Surfer is captured by a portal of the Planet Sakaar Empire. Left weakened and vulnerable by his trip through the portal, the Surfer is subdued and implanted with an obedience disk to ensure he remains loyal to them. Fighting as a gladiator (and believed to be the fabled 'Sakaarson' due to his appearance), the Surfer is finally forced to face the Hulk along with his Warbound. Through teamwork and distraction, the Hulk is eventually able to destroy the Surfer's obedience disk. The Hulk and several other slaves and gladiators are freed when the Surfer uses the Power Cosmic to remove their own obedience disks and give them a way out of the arena, although the Hulk declines the Surfer's offer to take him back to Earth.

Alias: Same as above