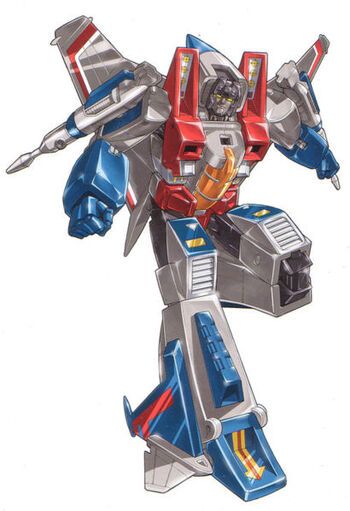 Starscream was the Decepticons' second-in-command. He was rash, boastful, cowardly, and even whiny. Millions of years before the war between Autobots and Decepticons would force both sides off Cybertron, Starscream was not a warrior but rather a scientist. He and his colleague Skyfire were exploring an unnamed planet—the anc

ient Earth—when severe atmospheric conditions separated the two friends. Starscream circled the globe looking for Skyfire, but he never found his colleague. Fire in the Sky After the outbreak of war, Starscream and his fellow Decepticons would become entombed on the same alien world for four million years before emerging to continue their battle on Earth, with Starscream reformatted as a terrestrial F-15 fighter jet. Starscream's rash and spiteful actions led to the resurrection of the Autobots on Earth, when a blast intended to trap the Autobots there forever caused Optimus Prime to fall into the life-giving rays of Teletraan I, who soon had all his fellow Autobots ready for action again. More Than Meets the Eye, Part 1 Starscream would always demand action rather than waste time with planning, often calling Megatron a coward or taking action himself without waiting for the order. Needless to say, this got him nearly killed by Megatron on more than one occasion. Starscream's status probably came from the fact he had command over the other jet fighter Decepticons, who formed pretty much 50% of the entire Decepticon force at the time of the first and second seasons. Megatron, very desperate for troops (especially ones who were so predictable), kept Starscream around.

In the film, Starscream rallies the other Decepticons to battle when Frenzy alerts them to the All Spark's location. He destroys the electrical substation that powers Sector 7's base, allowing Megatron to come out of his deep freeze. In the final battle between the Autobots and Decepticons, he is the first Decepticon to arrive on the scene thanks to his flight capability, which he also uses to ambush the Autobots when their human allies mistake him for a friendly Air Force pilot. He aids Brawl and Megatron by firing missiles in his Raptor form at Bumblebee and Ironhide, destroying the former's legs and injuring the latter. Later, he stops Sam Witwicky from fleeing by land with the Allspark, easily disabling both Ratchet and Ironhide in the process; however, he doesn't take the Allspark. When Sam is about to hand off the Allspark to a Black Hawk crewman, Starscream shoots down the helicopter. Later, when a full airstrike has been called in on Megatron and Blackout, Starscream conceals himself among the attacking jets in order to ambush them. He destroys three of the jets, but retreats from the battle after the F-22 pilots regroup and engage him, allowing the jets to complete their mission. In Transformers: Revenge of the Fallen, Starscream is first seen on the Nemesis ship wreck and is confronted by Megatron, who is angry because Starscream left him to die on Earth. He reveals that they are nearly running out of energon, the secondary source of life, after a couple of the Cybertronian protoforms in the Nemesis die prematurely. He is later seen fighting alongside Grindor and Megatron against Optimus Prime, but is subdued quickly and his arm chopped off. He and Megatron escape after Autobot reinforcements arrive to protect Prime's body. Before reattaching his arm, Starscream is beaten by Megatron on top of a building for not being able to catch Sam. He is seen later in Egypt with the other Decepticons who are looking for Sam. He tells Rampage to spring the trap for Sam when Sam and Mikaela got close which results in the demise of Rampage and Ravage. When The Fallen is killed, Starscream convinces Megatron that retreating is their only option of survival as they leave Earth. Along with Megatron, and Soundwave, Starscream is one of the only three confirmed Decepticons who survived the film.