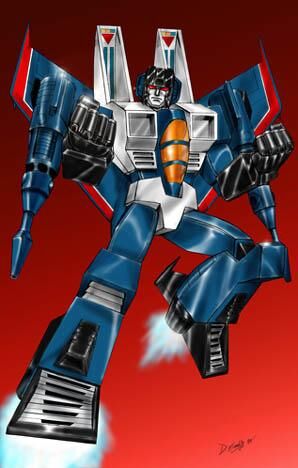 Thundercracker was one of Megatron's elite warriors, participating in the attack on the Ark and joining the rest of the Earth-bound Transformers in their several-million-year nap under an inactive volcano. He awoke when the rest of the Decepticons did, and took part in their attempts to gather energon and escape the planet Earth, which he loathed for being too "flat". It was he and Reflector who spotted the first "potential Autobot", when in fact they had discovered the planet's native inhabitants, two humans, in an unliving vehicle. One of the few things he seemed to loathe even more than the world he was stranded on was the attitude of his commander, Starscream. Thundercracker often started fights with the Air Commander, usually over whether or not Megatron's latest plan was a waste of time (Thundercracker took Megatron's side). At one point, Thundercracker's distaste for "that geeky Starscream" became so strong that he was willing to let Skyfire destroy one of the Decepticons' greatest weapons, just in the hopes that Starscream would get blamed for it. Despite these brushes with treachery, however, Thundercracker just never had it in him to do anything more than complain about his fellow Decepticons. Thundercracker was present for the Decepticon assault on Autobot City in 2005. After the battle, the injured Thundercracker was tossed out of Astrotrain with the rest of the injured and weakened warriors, who were jettisoned for ballast in order to preserve fuel. That was not, however, entirely the end of Thundercracker's story. Unicron was waiting in space for a chance like this, and when the newly reborn Galvatron needed some new troops to command, Thundercracker was among the old Decepticons chosen to use as raw materials. His body was used to create Scourge, and was thus given a new lease on life.

Thundercracker has currently appeared in the Robot Heroes line one time: