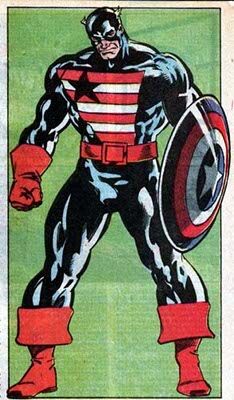 John grew up idolizing his older brother, who had been killed during the Vietnam War. He went into military service but felt he wasn't a 'hero' like his brother was. Walker underwent the Power Broker process to compete in the Universal Class Wrestling Federation. However, his agent convinced him that he should become a hero. He became the Super-Patriot, arguing that he stood for America's 'true ideals' and began to publicly discredit Captain America. Captain America later abandoned his identity due to Red Skull's manipulation of the Commission on Superhuman Activities. Walker took the role as Captain America, moderating his views.

Having killed his parents, Walker retaliated by killing most of the Watchdogs. He captured Left-Winger and Right-Winger and used his old 'torchsword' to ignite explosives they were strapped to, leaving them horribly burned and in comas. Eventually there was a confrontation with Captain America who was then calling himself the Captain. Walker was stopped by Rogers. In light of these events, Walker was deemed unworthy of the Captain America title due to his actions. Walker's death was soon faked by a member of the Commission and he re-emerged as US Agent. He has served on the Avengers West Coast and Force Works.

US Agent currently has appeared in the Superhero Squad line one time: